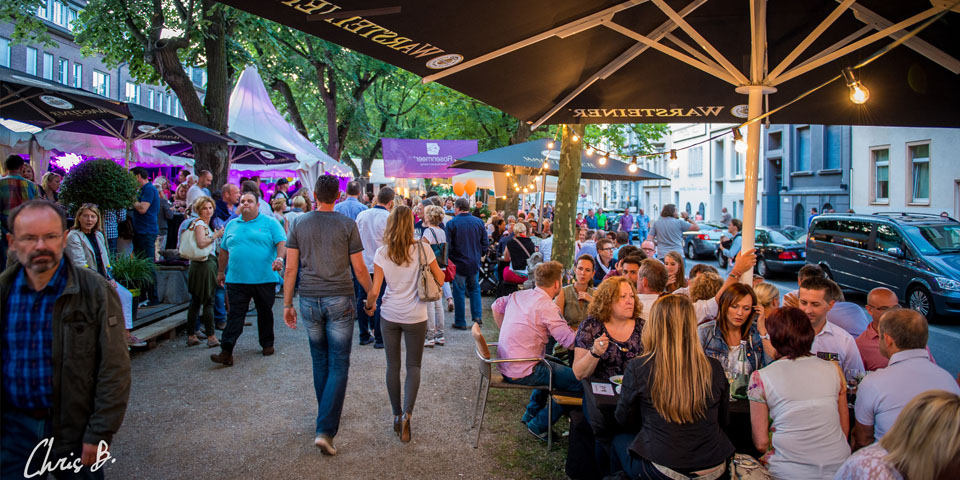 A varied programme will be offered again over 3 days. More than 30 restaurateurs will be participating with Italian, Spanish, Asian, French, German, American and South American cuisine. The festival will be officially opened on 16 August 2019 by the patron of the event, our Lord Mayor Hans Wilhelm Reiners. Just like every year, the big Sparkasse live stage with almost 30 hours of entertainment is the focus of the festival. As in previous years, the stage programme will be organised by Mickey Bernard and MediArtus. On Saturday there will be jazz early shopping with Sofa Sogut and Vitus Micha and in the afternoon there will be a Zumba Show, a choir of Sound and Spirit, the popular band Obergärig and the Prime Time Act with VIVIDD featuring electrifiying dance-funk-pop. On Sunday, the traditional open-air church service is scheduled, followed by a family Sunday with talk, dance and music, topped off with the crowning finale of Booster.

On the Gladbach side of the festival, Richard Wagner Strasse, the focus is on the arts and crafts market organised by Gladbach artist Harald Dewies. 35 artists from all over the world have confirmed their participation in the arts and crafts market. In addition to goldsmith workmanship, the pencil maker and driftwood crafts, there is also someone who processes coffee capsules, a saltmaker, grey tone designers and much more. The AOK has created an experience stand for the “little ones”, you can find airbrush tattoos, Borussia Mönchengladbach is coming with “Jünter” and the bouncy castle, you will also find the 16 metre event crane, a children’s carousel, bungee trampoline as well as the GURU experience world and a karate school on show and much more. After the great success last year, the Rollbrettunion e.V. operator of the skating hall in Mönchengladbach-Rheydt has now organised the EineStadt-Fest for the second largest slalom race in Germany. An international starting field can collect decisive World Cup points for the ranking list of the ISSA World Championship.

On Friday (16 August) the “Eine-Stadt-Fest” will be hosting the WDR 4 Summer Open Air. Peter Illmann, a presenter with a high level of musical competence, will be on stage. At the WDR 4 Summer Open Air in Mönchengladbach he will prepare the audience for the weekend with Haddaway, Sydney Youngblood, ex-Weather Girl Ingrid Arthur, the WDR 4 Band and comedienne Achnes Kasulke.

FR from 6 p.m. to approx. midnight

SAT from noon to approx. midnight