Fairtrade Town is a worldwide campaign which is organized in 24 countries by TransFair e.V. and was originally launched in Great Britain in 2000. Since January 2009 local authorities in Germany have been able to compete for the title of Fairtrade Town as a reward for their commitment to the principles of fair trading. Mönchengladbach is one of them because the city wants to show its commitment to justice, sustainability and solidarity. The city of Mönchengladbach was named as a Fairtrade Town in a formal award ceremony that was held on 20th November 2014.

Anyone who wants to know where fairly traded foodstuffs or textiles can be bought in Mönchengladbach and which pubs, clubs or cafés serve fairly traded products can look the information up on the www.fairtrade-mg.de  website or use a printed copy of the “Fairtrade Guide”. This is available for free in lots of places, for example in Mönchengladbach town hall at Gladbach Abbey, or in the Eine-Welt shop.

Fairtrade coffee – made in Mönchengladbach

The Mönchengladbach company Bernd Boddart markets not only coffee machines but also the coffee that is used for semi-automatic and fully automatic coffee machines. A new addition to the range is the Alessio “Gladbacher”, a fairtrade coffee. It is made up of 60 percent Arabica and 40 Robusta coffee beans. “This provides a genuine, full flavour for a creamy café creme or a typically Italian espresso”, says Sales Manager, Markus Göbels.

The company has spent a lot of time working with the roasting plant to perfect the flavour – because that’s what lies behind most people’s decision to buy a particular coffee. “I’m a Mönchengladbacher by conviction and I’m very happy to support Mönchengladbach as a Fairtrade city with this coffee”, says company boss, Bernd Boddart.

Further info is available at www.boddart.de 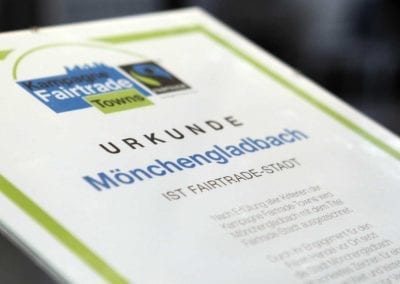 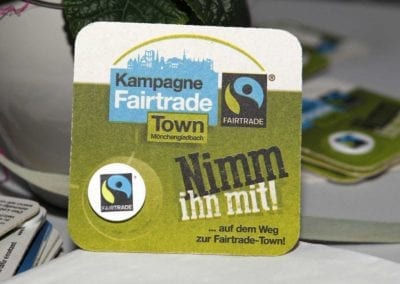 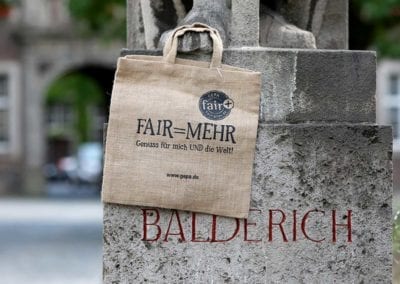