It was built in 1900 as the offices of the Prussian imperial military enlistment authority. The building is built in a historicist (historical revival) style which is characteristically picturesque, and it forms the main part of the circle of ‘new’ public buildings around the main square in Rheydt. The military enlistment office formed a key part of the overall redesigning of the town centre of Rheydt at that time, and it was a symbol of the town’s increasing prestige. The building which was built in 1880 was taken over by the town council in 1905 in order to add another storey to it and to provide it with a redesigned facade. 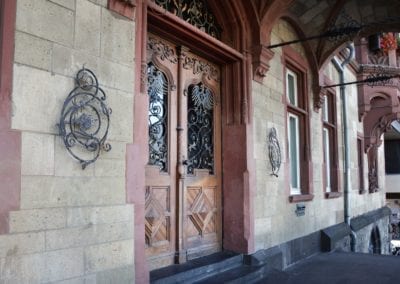