On the site of the town’s former main church whose origins can be traced back to before the 14th century, the new evangelical church which was built in 1902 is a feature of Rheydt’s marketplace which can be seen for miles. Together with the striking tower of the town hall which was completed a few years earlier it forms a splendid and imposing complex of public buildings in Rheydt marketplace – which was once the focal point of the old town of Rheydt. Whilst from the outside the church looks like an impressive “cathedral” which is flanked by towers on all four sides, inside the broad, well-lit building one’s attention is immediately drawn to its function as an evangelical place of worship. The altar and pulpit form an inseparable unit which is used for proclaiming the word of God and for administering the sacraments. It is complemented by an elaborately decorated organ in the gallery at the other end of the nave. The gallery and all the seating faces the altar and pulpit which can be seen from virtually all the 1,200 seats. The necessary supporting columns are slender so as not to obstruct the congregation’s view of the preacher. True to reformist principles, the pulpit by the side of the altar does not place the preacher in an especially lofty position: he is merely “an equal among equals”. Splendid decoration completes the dignified effect of the interior 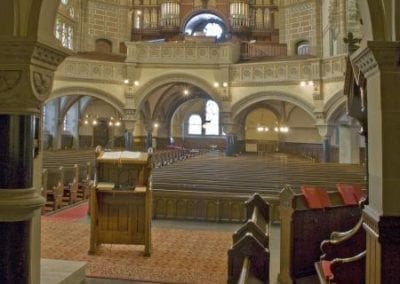 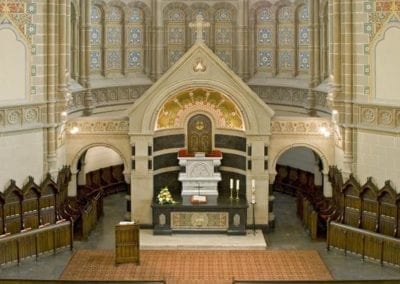