Schloss Rheydt is a range of buildings whose origins go back as far the 12th century. The current buildings are largely the result of rebuilding work carried out in the middle of the 16th century, which means that the castle is now the only fully preserved renaissance complex of buildings in the Lower Rhine region. Over recent years the museum has been extensively restored in line with its original appearance so that the rooms take you back to renaissance times. Original features which have been retained include the chimneys, ceilings and wall paintings as well as the floor coverings. After a trip back in time in the museum, the park in which the castle is set provides a beautiful setting for going for a stroll or just relaxing and having a bite to eat. Every part of the castle is used as a museum. The manor house which is centred on the “Wunderkammer” (chamber of curios) features an impressive display of artworks and other cultural artefacts from the renaissance period. There’s also an exhibition in the vaulted cellar which traces the history of the building and its use. The inner courtyard has display areas where several large temporary exhibitions are put on every year. In the inner courtyard there’s also a continuous “flashback” exhibition about the history of the city.  In the underground casemates (fortified gun emplacements) the history of fortifications is illustrated based on the example of Schloss Rheydt. In the gatehouse is the museum studio where workshops, courses for children, children’s birthday parties and many other events are held. 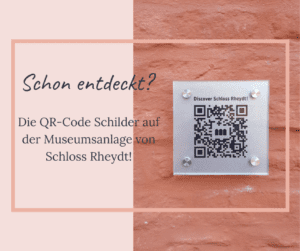 The Rheydt Castle Municipal Museum has installed nine signs on the entire museum grounds as part of a museum education measure. These can be discovered and scanned by curious visitors and walkers. It’s child’s play: simply scan the QR codes with your mobile phone and you get a few interesting facts and information about the respective locations or parts of the building. It’s worth discovering all the signs!