On 11th May 2002 the Abteiberg sculpture garden was opened as one of the art trails to be included in the ‘EUROGA 2002 plus’ multi-site regional horticultural show. This long-planned but never previously realised addition of an external dimension to the Abteiberg Museum underscores its position at the heart of Mönchengladbach’s urban landscape overlooking the Alter Markt.

The new sculpture garden previously featured two landscape design concepts – the upper section of “rice terraces” designed by Hans Hollein (1974 – 82), and the lower part laid out in a pseudo-baroque arrangement of formal flowerbeds by Karl Birkigt (1975). Both designs architecturally transformed the former abbey orchard for their own purposes, leaving little room for sculptures. The result is a charming, largely formally planned park layout with copper beeches and chestnut trees extending from the terrace around the museum to a lower wall which is part of the old town wall.
Since 1982 the upper part of the abbey garden has been the setting for the sculptures “Soft inverted Q” by Claes Oldenburg, “Tree of Water / Breath of Leaves” by Giuseppe Penone, “Juan” by Bernhard Luginbühl, and “Königsstuhl” (“Throne”) by Anatol. Added to this is the vicarage garden to the west which is separated by a low wall and adjoins the Romanesque minster.

For the Euroga horticultural show funds provided by the North Rhine-Westphalia government and Mönchengladbach city council were used to purchase six sculptures by well-known sculptors. Some works were specially designed for the abbey garden.
The “Made for Arolsen (Pink/Blue)” installation which was produced in 1992 by the American minimal artist Larry Bell (born 1939) forms the centrepiece. Two double-cubes made of alternating pink and azure glass are placed diagonally into the existing water basin beside the fountain, creating colourful lines of sight and reflections which breathe new life into the existing Baroque cliché that is made of exposed aggregate concrete.
By contrast, the six-metre high Anello (Ring) which was constructed out of Cor-Ten steel in 2001 by the Italian conceptual artist, Mauro Staccioli (born 1937), has an almost contrapposto effect. The elegant sculpture takes its position in the exhibition almost literally by appearing to roll down the slope of the lower lawn. This sets the almost hieratic centre of the park in motion.
Another figure who belongs to the generation of constructive conceptual artists is the French artist François Morellet (born 1926). His almost 3 metre high ‘Sphère’, an orb which consists of intermeshed rectangular stainless steel rods and is already owned by the city, expresses the fusion of the orb and cube as a visual, insubstantial form rather than a tangible form. The almost floating sculpture by Morellet dominates the lower part of the lawn in the rectory garden. The upper section is dedicated to a more recent form of conceptualism. The “Flause” sculpture (1998) by Viennese artist Franz West (born 1947) is a pink, pill-shaped aluminium sculpture that is slightly shifted from its vertical axis, a capriccio which is a whimsical synthesis of pop art, a ‘happening’ and self-reflection.
On the steps leading back up to the abbey garden there is an intimate bronze stele by the Mönchengladbach artist Maria Lehnen (born 1949). It combines an archaic sphinx-like quality with female eroticism, and it creates conceptual lines of sight to the “masculine” throne by Anatol.
The other sculptures are works by three younger artists who represent the aesthetics of the 1990s. The American artist Jorge Pardo (born 1963) has created a group of six small bronze sculptures which line the paths above and beside the fountain. Their organic, abstract amoebic forms have openings and carry plastic bags. As the title “Garbage Can” reveals, they serve as rubbish containers, combining in a chameleon-like way the role of sculpture with the utility of practical objects.
Dan Peterman (born 1960) from Chicago focuses on the role of refuse and transience throughout his sculptural material. The root of a copper beach tree in a ruined tower which is part of the old city wall that runs alongside Spatzenberg is the point of departure for his walk-through sculpture. Slabs and seats made of recycled plastic incorporate the dead root and form a haven of peace – a paradigm of permanence and transience.
The combination of nature, art and life is clearest of all in the Tree House by Hamburg sculptor Stefan Kern (born 1966). This lofty quadrangular platform built around the trunk of an old chestnut tree is made of aluminium sheeting, and it’s a utopian autonomous expression of the neighbouring constructive and decorative ideas of Hans Hollein. The gleaming lookout post, which can be accessed “at one’s own risk”, hovers in the treetops like a UFO.
Outside the abbey garden sculptures by Alexander Calder, Thomas Rentmeister and Daniel Pflumm provide an inspiring artistic setting for the museum and create a link to the planned Sculpture Mile in the city of Mönchengladbach.

Access: via a stairway from Weiherstraße, from Spatzenberg (steep slope), from Abteistraße via a stairway; please note that there are also steps in the Abteigarten (Abbey Garden). 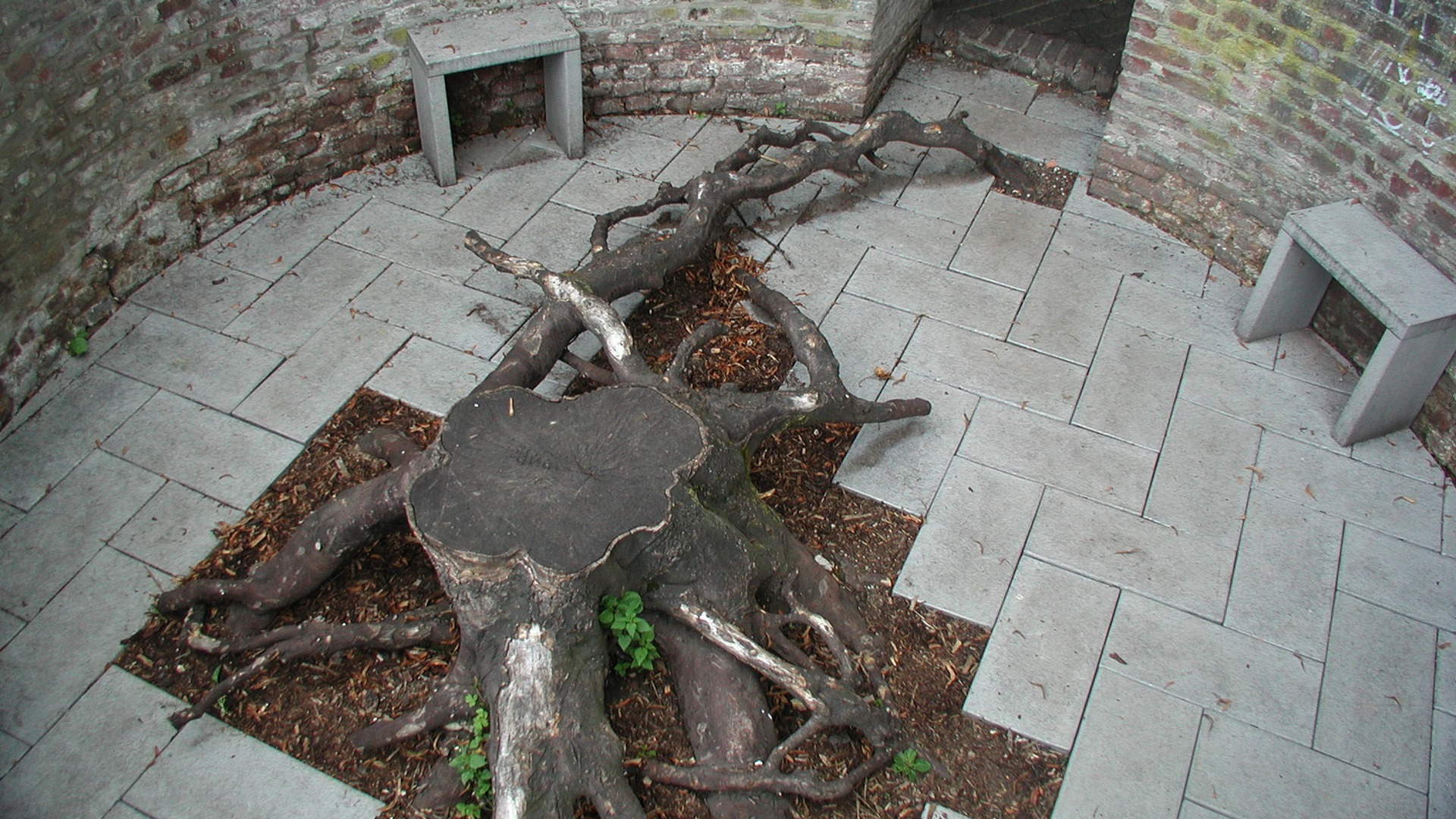 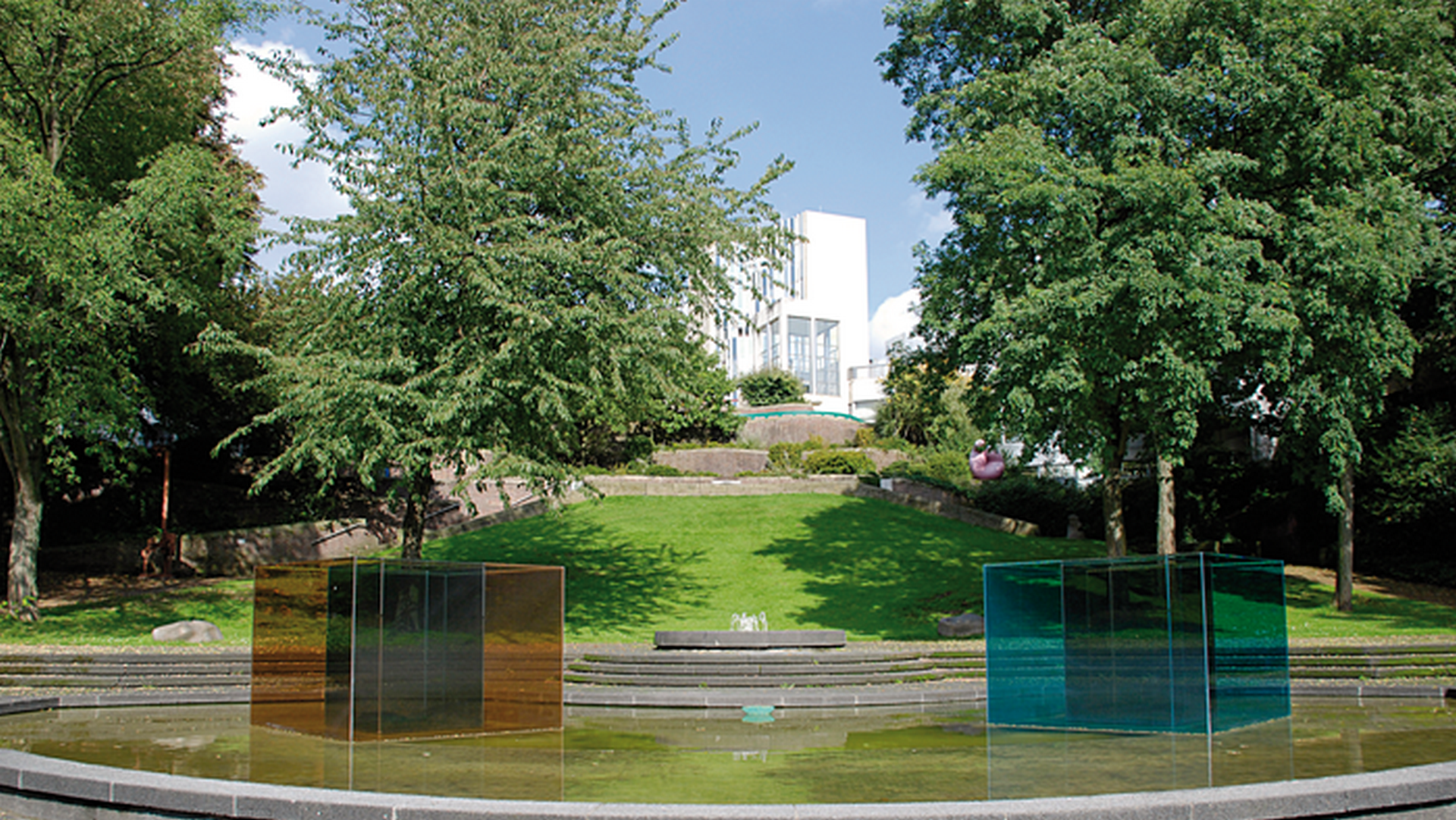 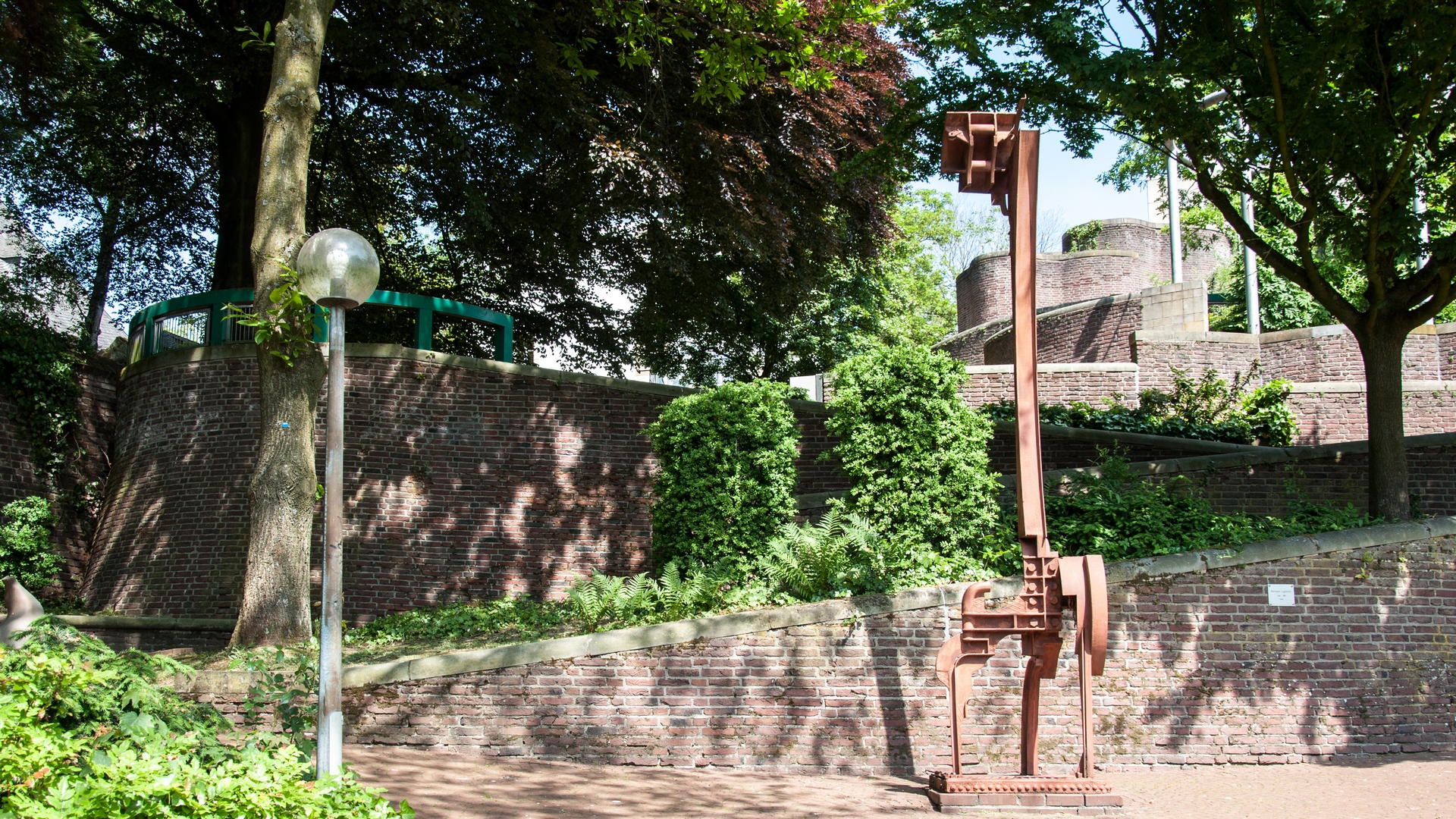 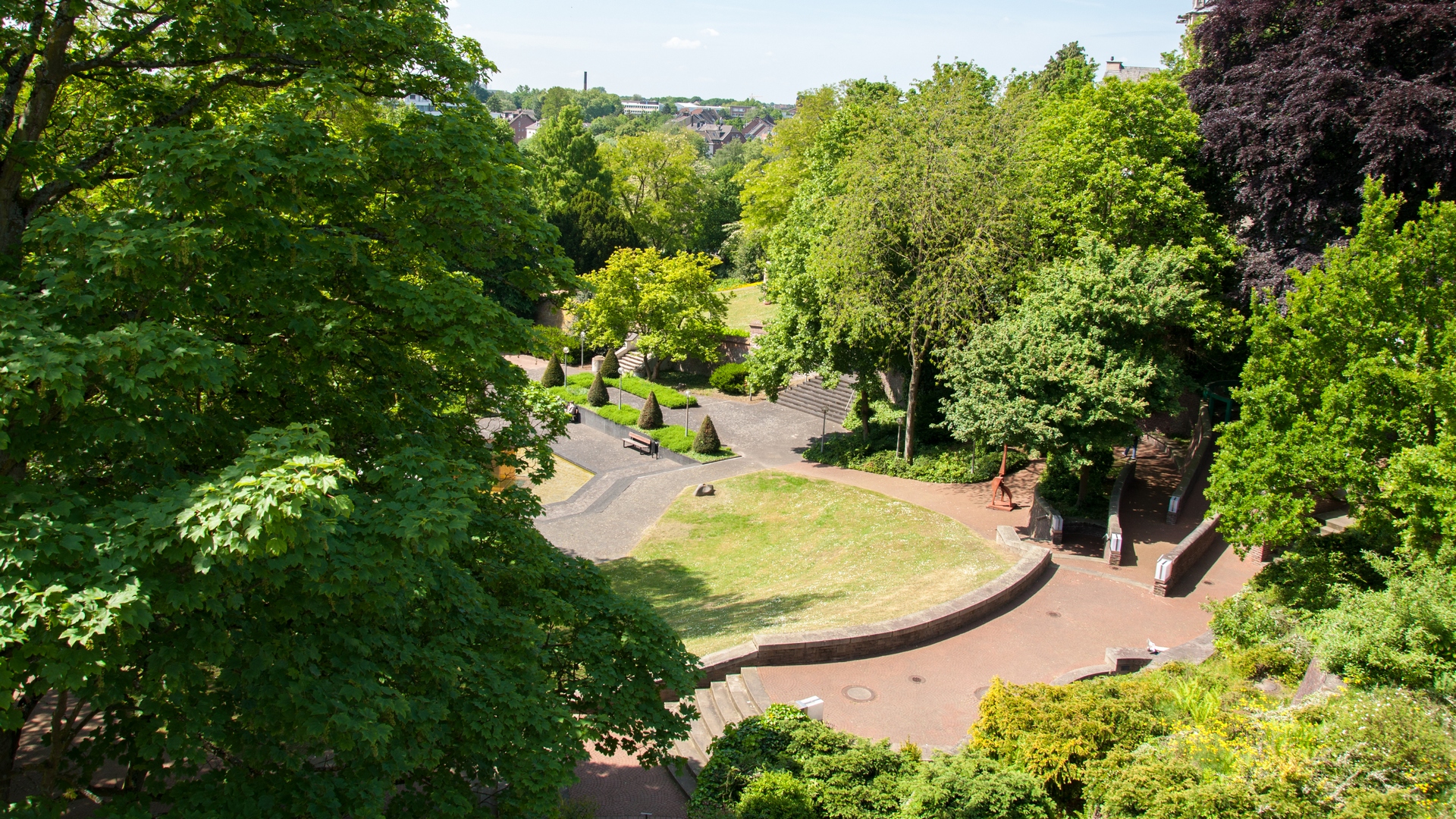 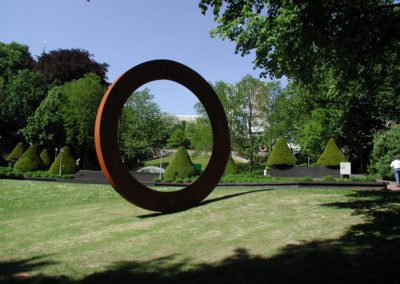 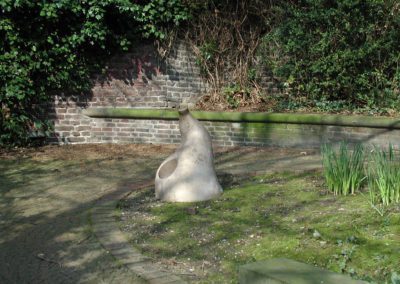 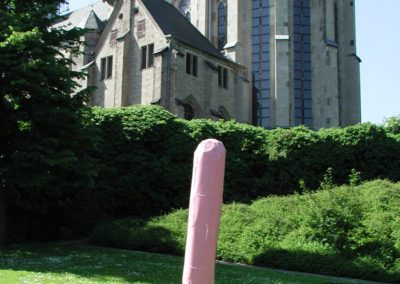 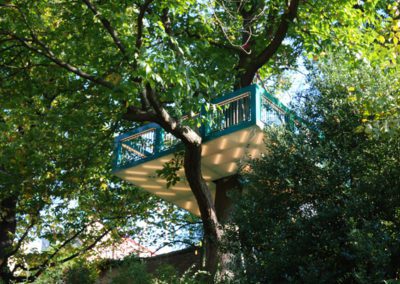