Tour of the stained glass works

Mönchengladbach with its many churches is a place which offers an exemplary range of stained glass artwork, some of which is of outstanding quality. It ranges from the internationally significant Gothic window in the cathedral which depicts biblical scenes to the rare works from the decades around the turn of the 19th century, and it includes in particular – following the immense destruction caused in the last war – a remarkable variety of high quality stained glasswork created since 1950. It’s not without reason that the „Forschungsstelle Glasmalerei des 20. Jahrhunderts“ (20th century glasswork research institute) is located here.

Tour of the stained glass works

Out tour takes in five churches that can be conveniently reached on foot. We want to open your eyes (and other senses) to an often overlooked art. To present techniques and styles. To tell stories. To raise awareness. And to spur people to go and see other sites and experience how the spaces of colour and light that are created by stained glasswork change our perceptions.

2 City Church (Our Lady of the Assumption) 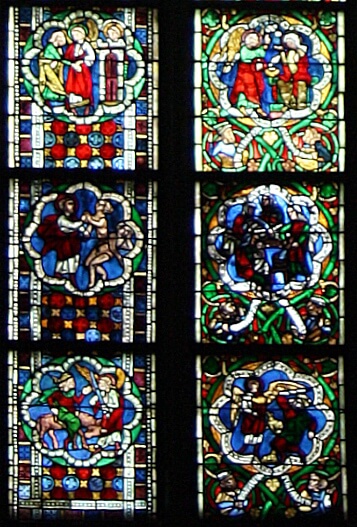 The original of the famous Gothic window depicting biblical scenes which dates from 1275 is preserved, except for three lower panes (you can see the panes that were added in 1958 if you look carefully). That really is extraordinarily rare. During the war it was removed and kept in a chemist’s shop in Odenkirchen, so it was spared from the bombs. You need binoculars to look at it in detail. 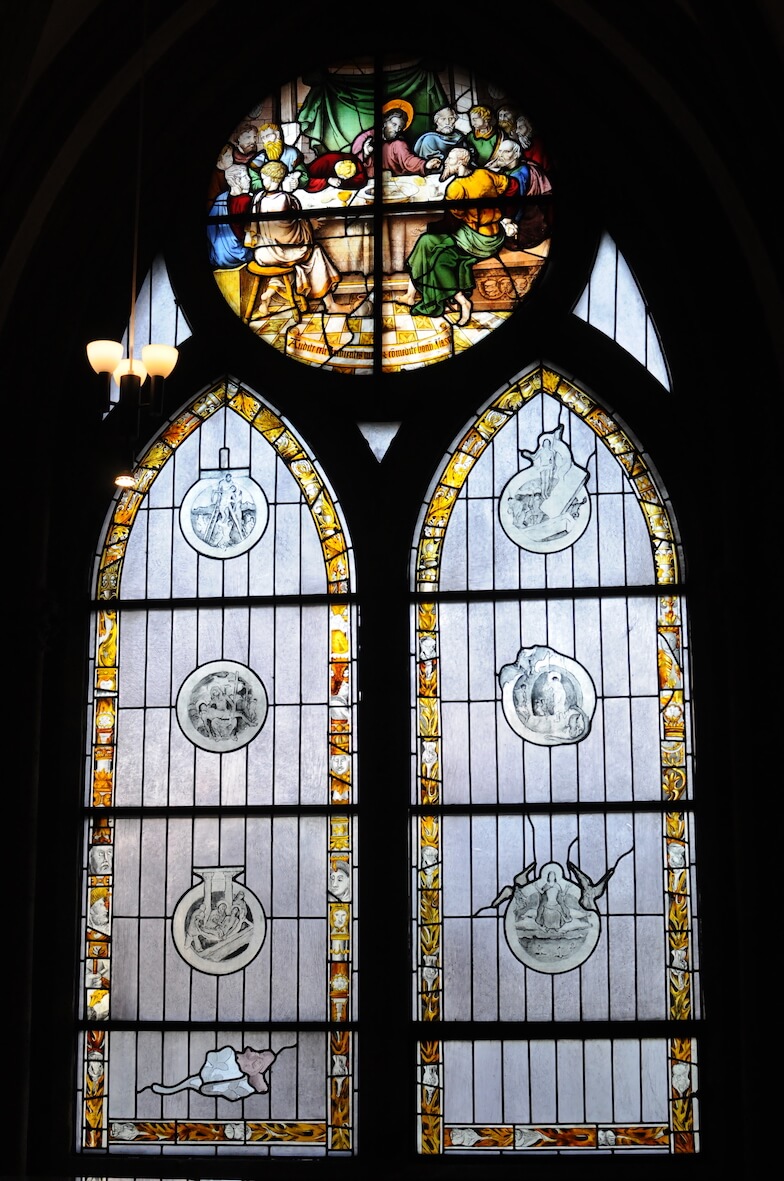 Hans Lünenborg invokes the formal layout of the 16th century window that was destroyed in the war. He uses intact panes which have survived and enhances them with his own grisaille painting. 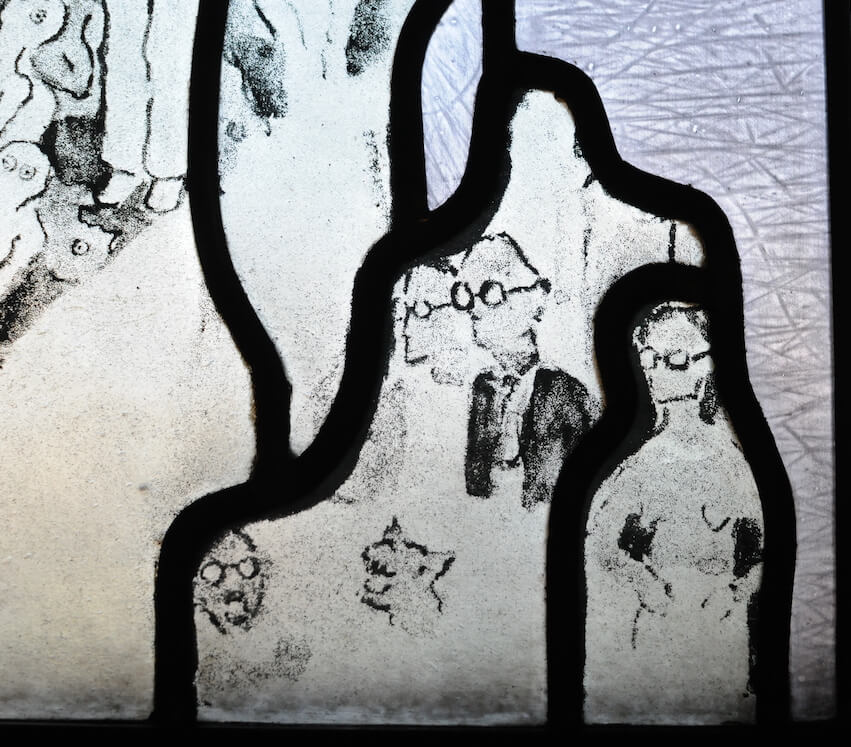 Witty features are his portraits of proctor Josef Kauff with his housekeeper and of the choirmaster Viktor Scholz and his dog, as well as the graffiti produced by generations of sextons in the writing around the edges of the lower left-hand Renaissance window.

Ornamental, graphic (cross) structures made of leading and painted lines on very light panes, bordered with dark bands which show the former size of the window. 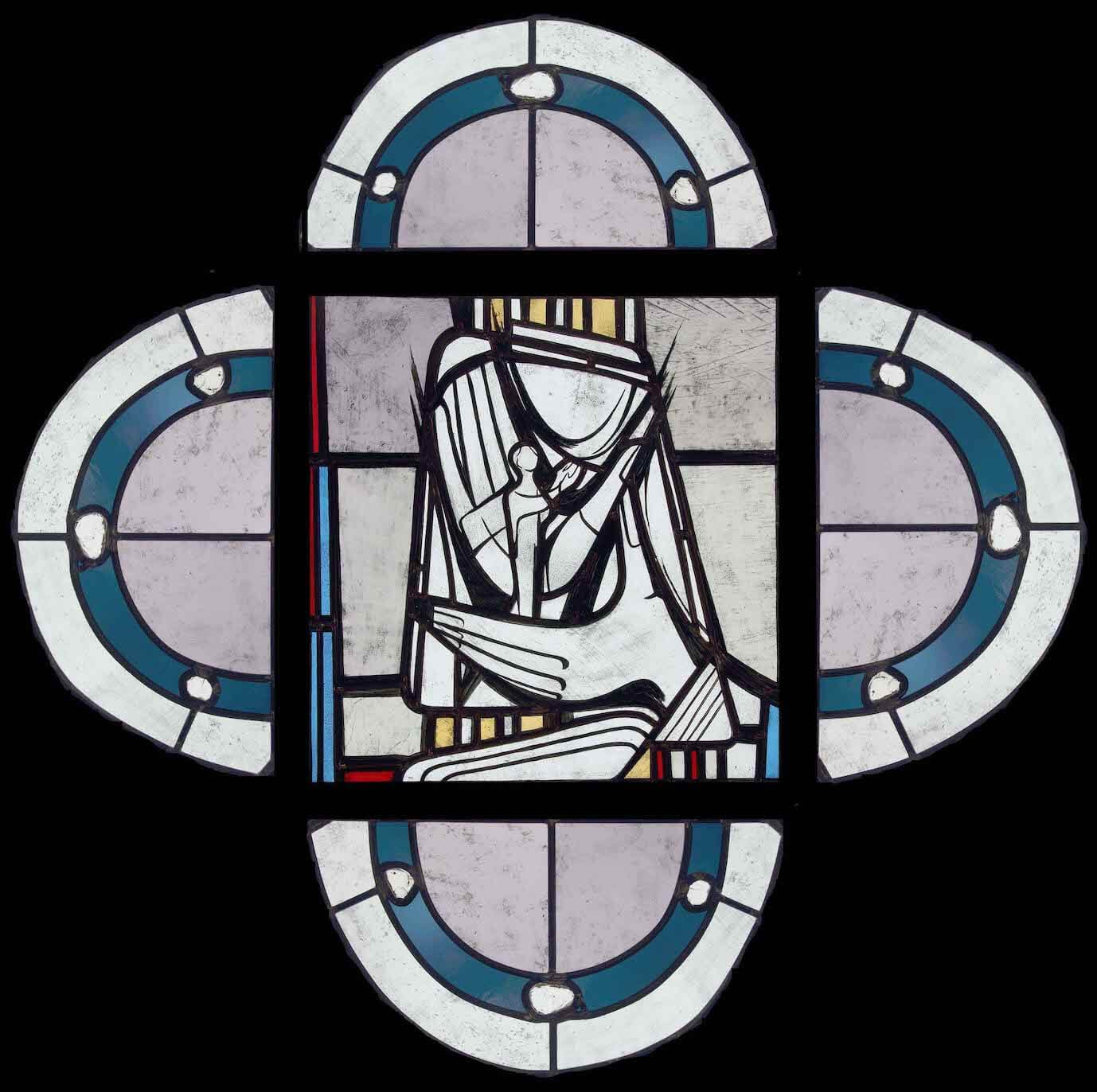 “Der Mensch in der Hand Gottes” (“Man in the hand of God”) was funded by the town council’s former Head of Culture, Anton Gathen, to adorn the cathedral’s rather hidden-away last remaining undecorated window. Gathen had selected the draft design (dating from the 1970s) when he was visiting the workshop of Jansen-Winkeln. 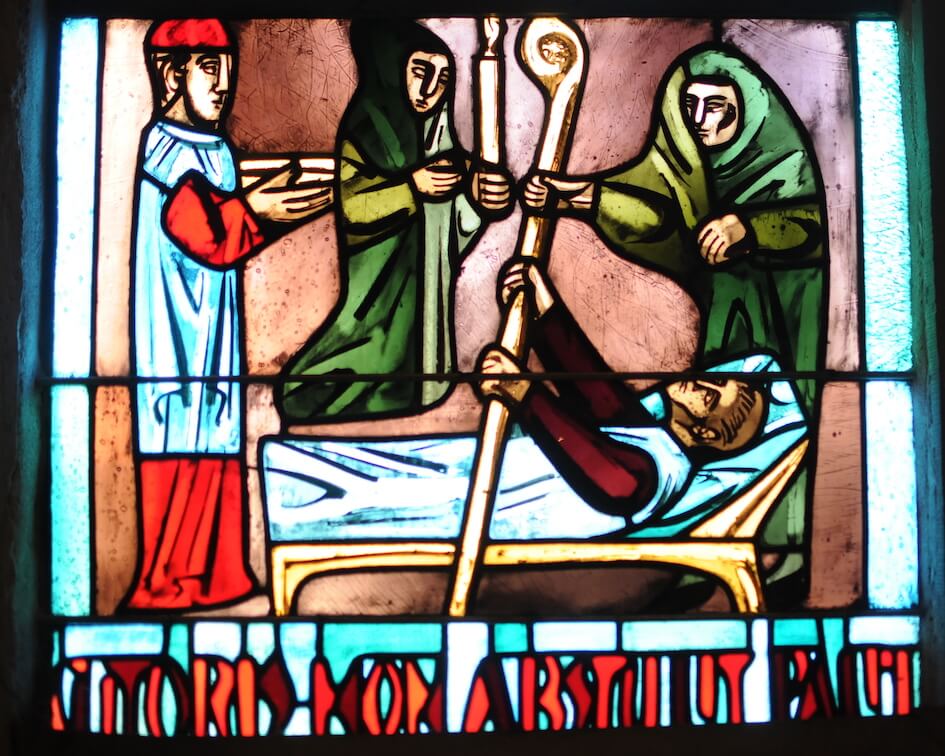 The windows in the choir an in Martin’s Chapel were the first to be installed after the war. Wilhelm Geyer loves strong colours, and the turquoise of the Martin’s Chapel is typical of his work, as is the southern-German style of painting which tends to disguise the leading rather than to emphasise ist.

The free composition in the window at the top of the cloister wall (unfornately covered in bars on the outside) has the effect of an abstract painting. Klos decorated the neighbouring City Church at the same time.

Abteistraße 41, 41061 MG
Tel. 02161 – 46 233 222
www.pfarre-sankt-vitus.de
}

p
Layout and range of windows

2 City Church (Our Lady of the Assumption)

This window won the stained glasswork of the year award for Klos who was up against some high-profile competition. This is where he created the style which he remained faithful to during the late 1960s: a non-representational style which immerses the space in lighting effects which change according to the time of day and the seasons. One of Klos’ later works is the window over the south portal which dates from 1998.
 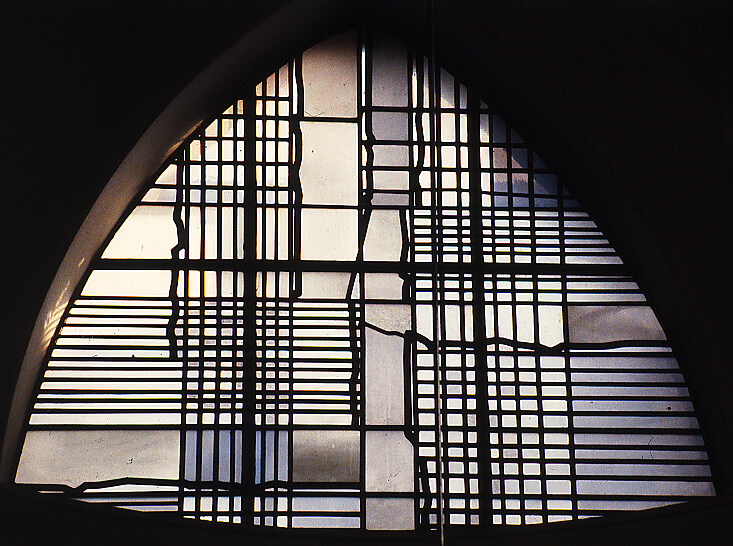 The church of St. Albertus was completely destroyed in the war. In 1976 the new building topped by Georg Ettl’s weathercock was fitted with light stained glass made of opal glass – which is a typical material for the 1970s. 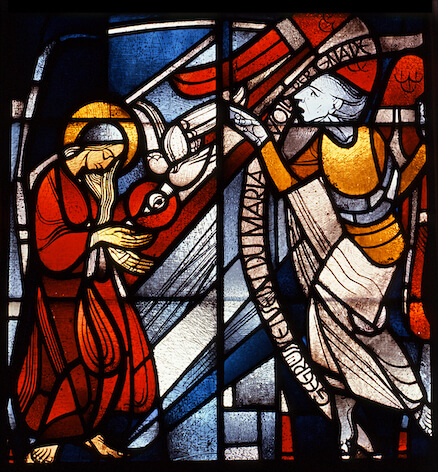 Ernst Jansen-Winkeln, chapel of the Annunciation to the Virgin Mary, 1951

The chapel windows originate from the neighbouring “little cathedral”. The work by Ernst Jansen-Winkeln is heavily influenced by the graphic arts and by woodcarving, and it’s typical of works by the stained glass makers of the Lower Rhine region.
 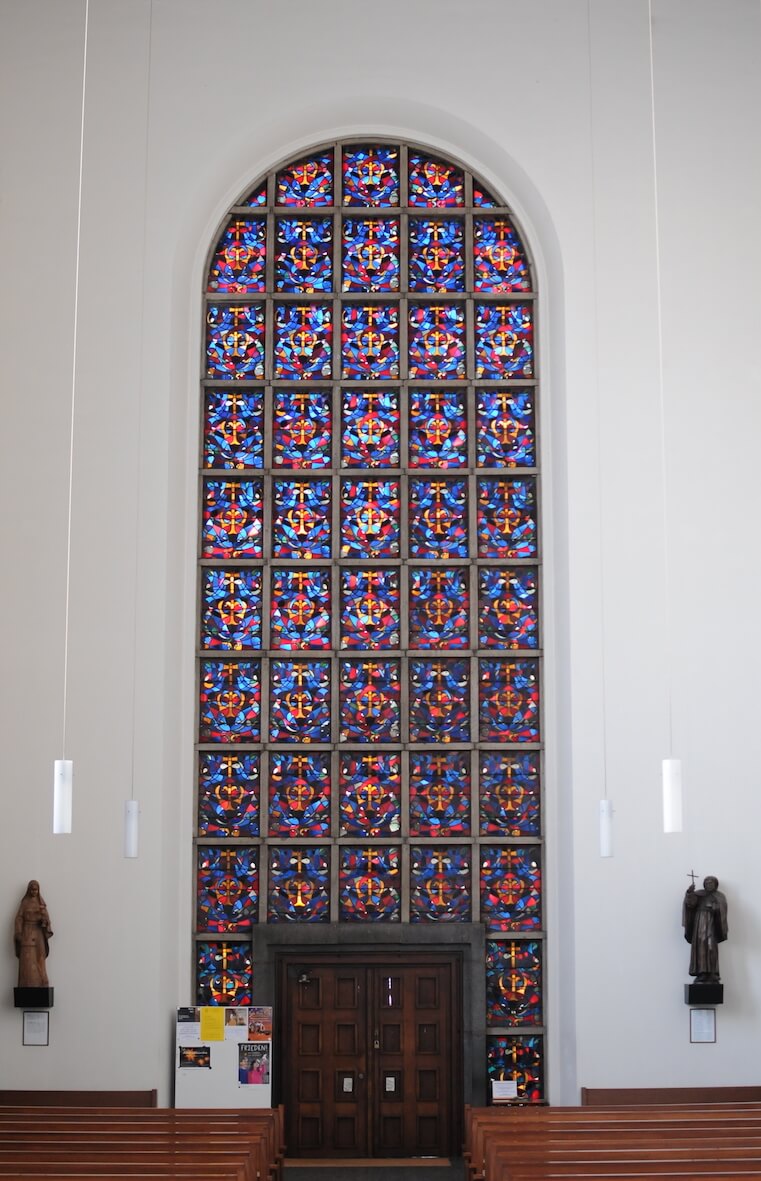 After the war the outside of the Franziskanerkirche was rebuilt in a neo-gothic style, and the interior dating from the same period is dominated by a sober white which Wendling used as a contrast to his wall of glowing red. A fish and a cross as symbols of Christ are leitmotifs of the interior decoration. 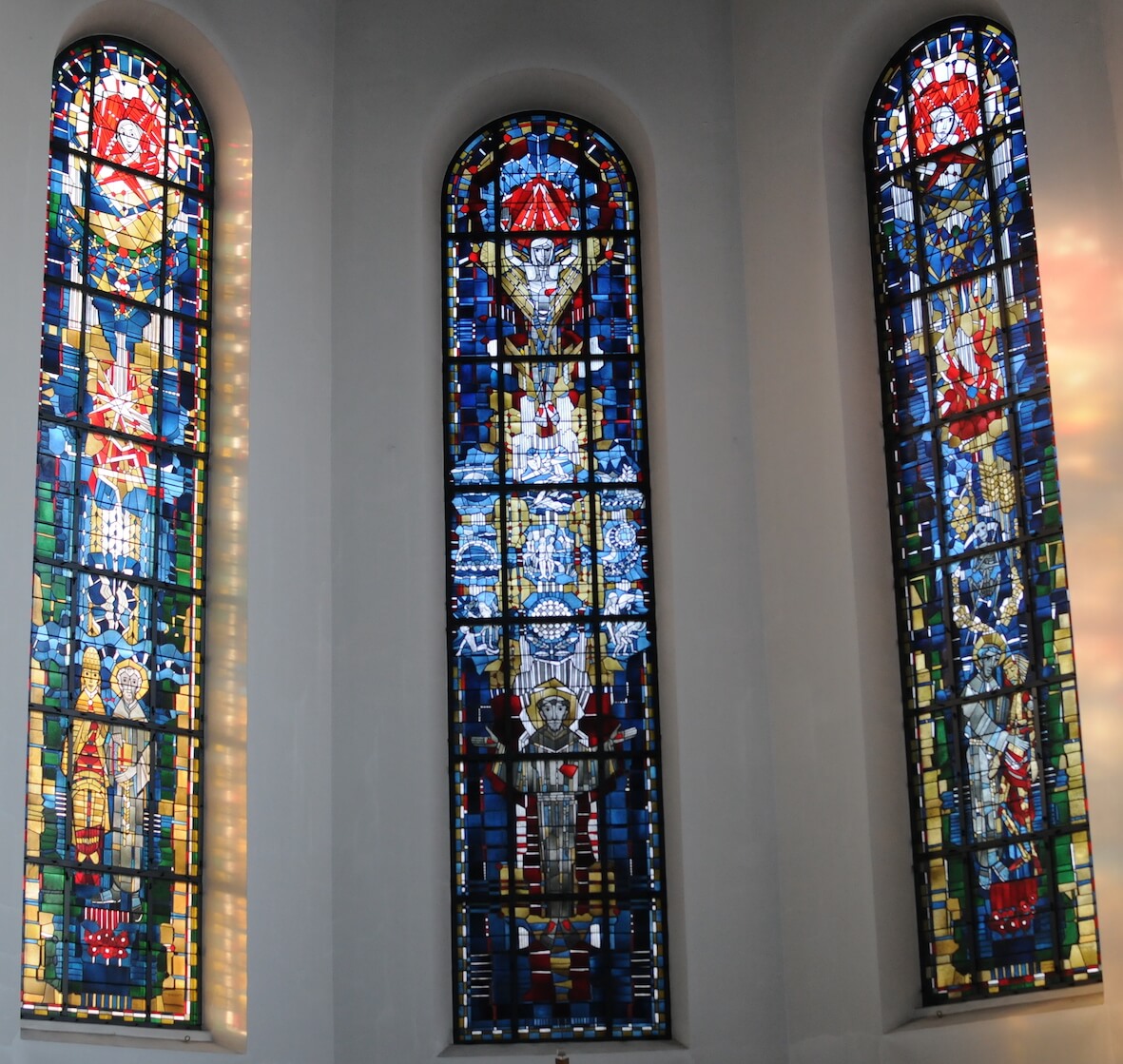 Working in close consultation with the church authorities, Jansen-Winkeln created the “Sonnengesang des Hl. Franziskus“ (Canticle of the Creatures), and the lower of the three levels is devoted to stations in the life of Saint Francis. V.l.: Stigmatisation, Annunciation, Charity

The kinetic serial composition was created using a computer. A plotter film was used to transfer and bake the enamel colours onto industrial glass (at 650 degrees centigrade). “They refresh the soul”, says the rector, father Wolfgang. 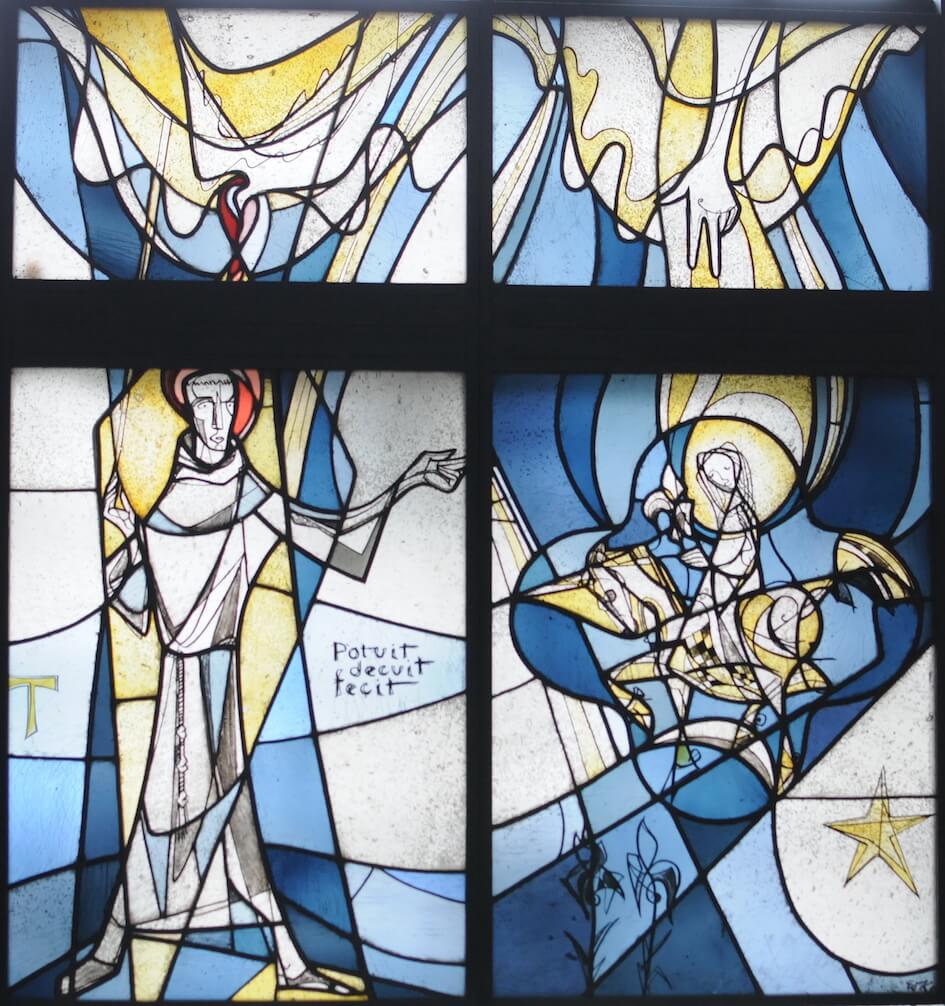 The pane like its two neighbours originates from the seminary in Neuss which was managed by Franciscans until it closed in the 1980s. Johannes Duns Scotus (1266(?)-1308) is a mediaeval Franciscan theologian, and the academy which bears his name has its headquarters in Mönchengladbach.
 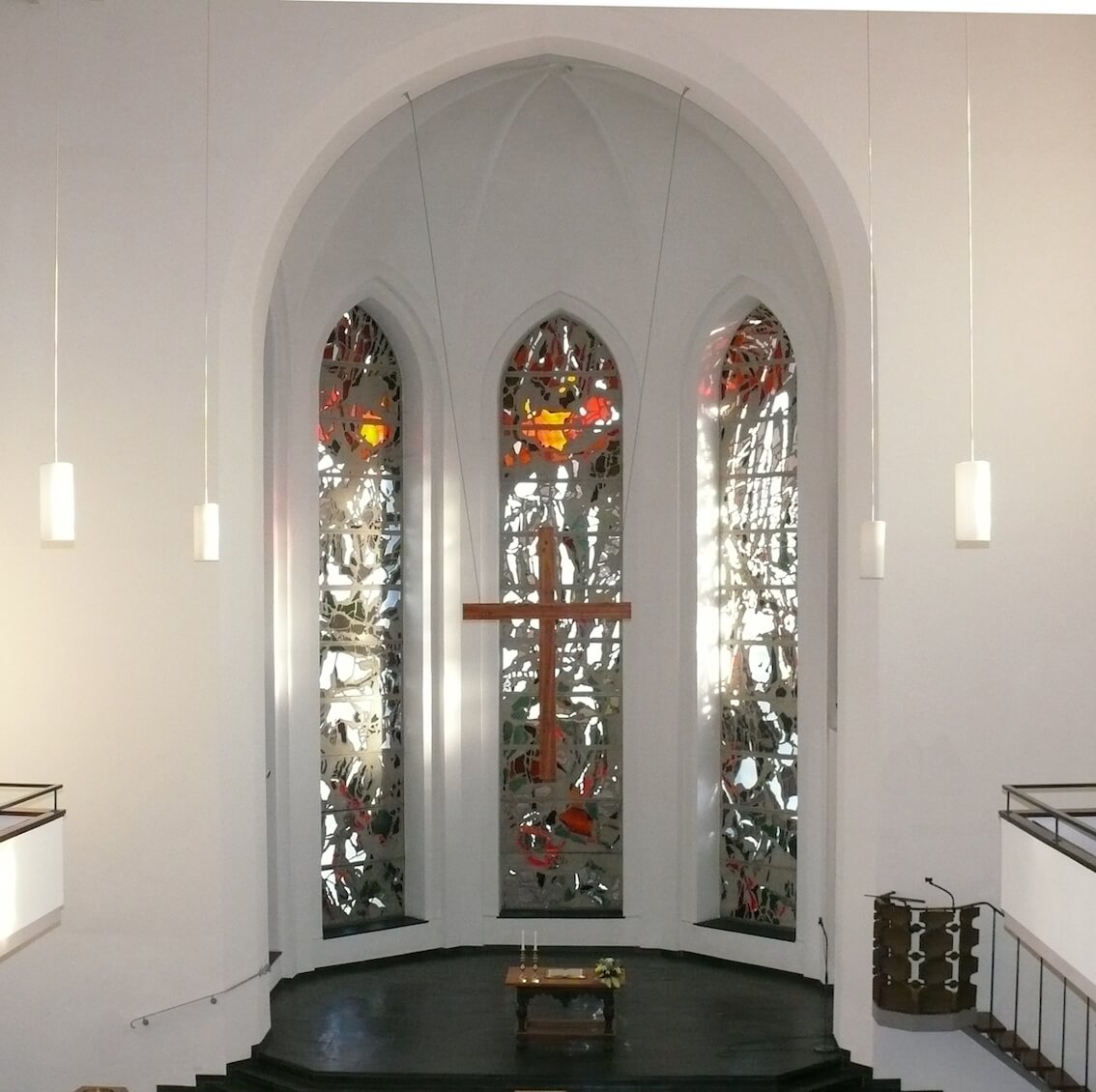 It was only Schreiter’s second draft of “Introversion 26” which gained the approval of the presbytery for the opening of the choir which had been bricked up after the war. The young artist, whose smoke pictures have brought him to the attention of the art world, develops great emotional expressiveness by using the non-representational mode of expression of Informelism. “Weltenbrand” (Conflagration of Worlds). Windows made of glass blocks went out of fashion after just a few decades. 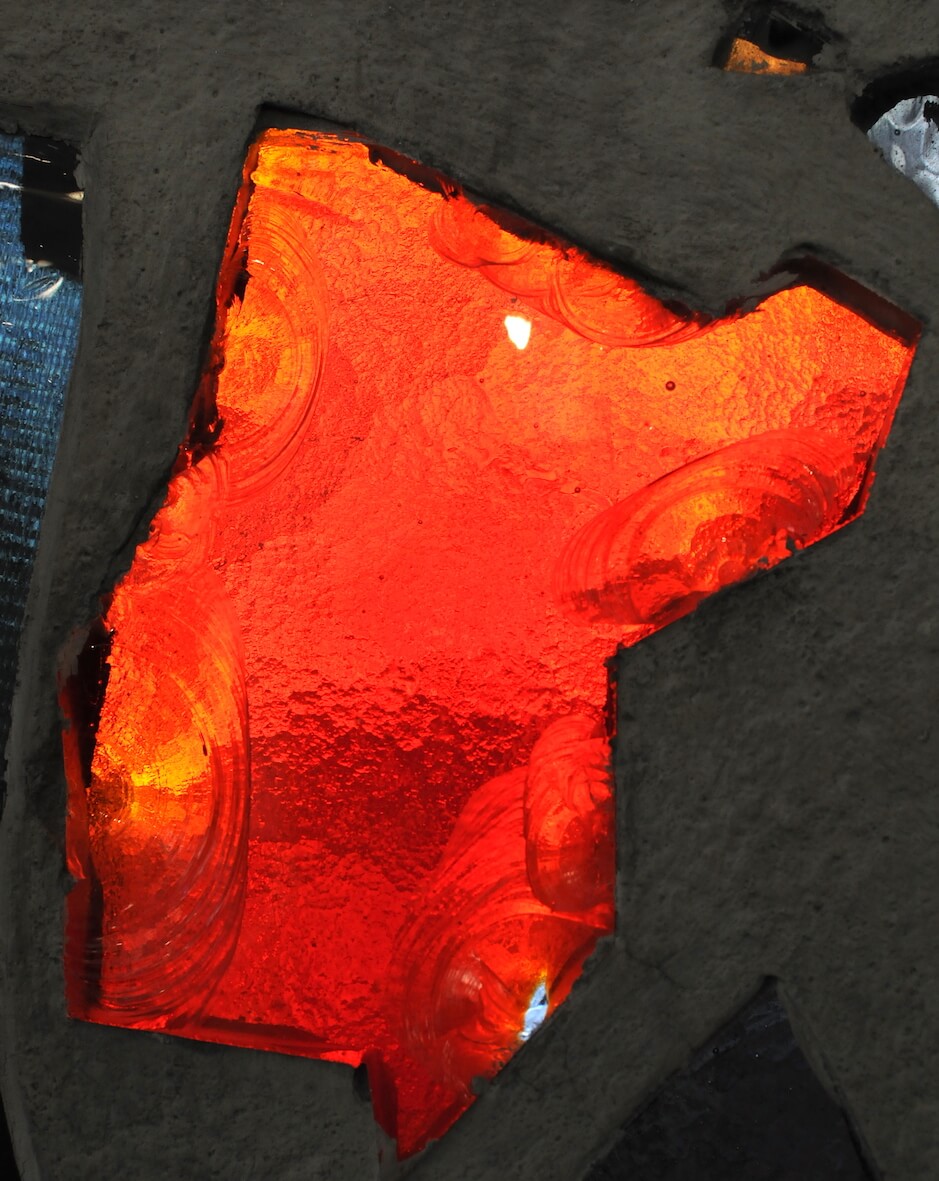 }
at church services
upon request
p
Layout and range of windows 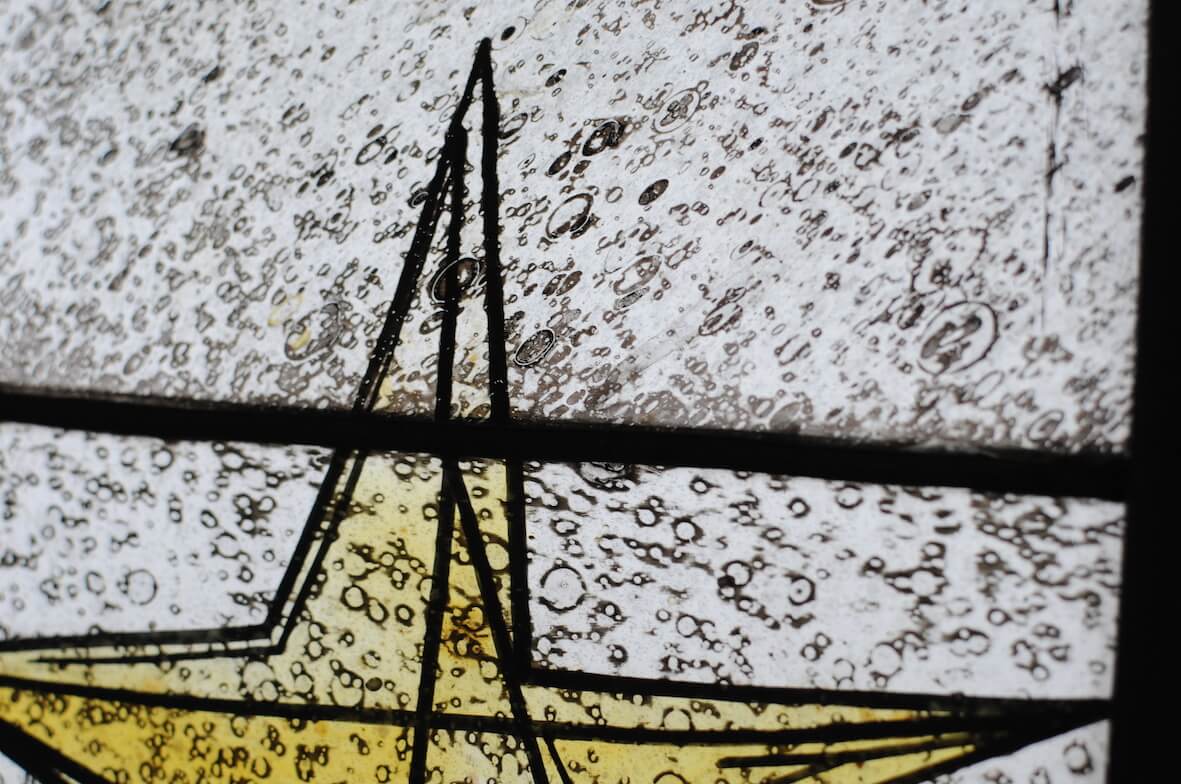 The techniques used in stained glasswork have hardly changed since the Middle Ages, at least as far as the leaded glazing is concerned. The artist and workshop usually work in separate stages. The artist produces a 1:10 or 1:20 scale draft after which the artist or workshop produces a life-size scale drawing from which patterns are taken, and 2- to 3-millimetre thick panels of (antique) glass” are then cut based on these. The glass painter can use black stain to apply lines, contours or shading glazes to the coloured panes, and he can score the surfaces and create areas of light and shade. 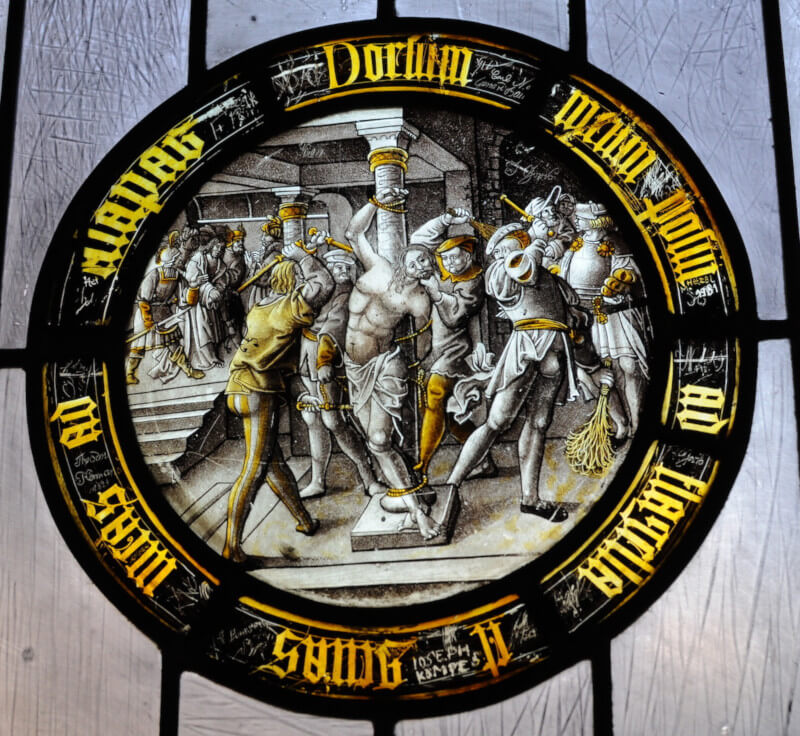 During firing the black stain fuses with the glass. The window sections that are fixed together with lead cames (jointing) to form the entire picture are stabilised with wind-resistant leading and transverse bars, and they are then placed in the wall opening before being sealed with putty. Silver stain and enamel are also used as means of providing colour. 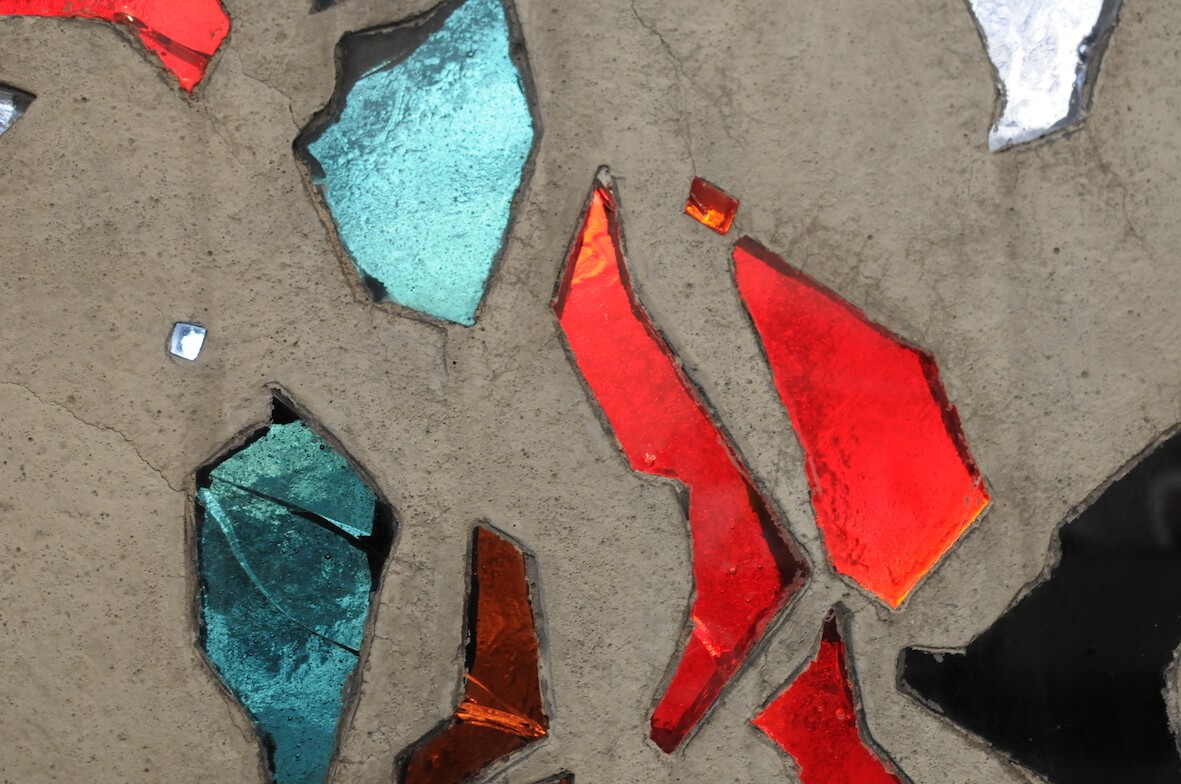 Glass windows made of glass blocks use 20-35 millimetre thick broken glass blocks which are fixed in a steel framework and cast in concrete.

hand-blown or mechanically produced, roughly 2-3 mm thick, in many colours and colour gradients, including air bubbles and a coarse surface. Basis of stained glass windows from ancient times to the present.

h-shaped, surround and join the panes of glass together after soldering. Produce the lead mesh

coloured enamel up to 3 cm thick. Used for windows made of concrete. The edges are often broken due to the light dispersing effects which this produces.

also known as cryolite glass, a cloudy glass with a milky opaque appearance.

oxidized iron or copper powder in fluxes; it is black after firing and is used for lines and contours as well as for shading glazes

thin strips of iron used for stabilising the panes