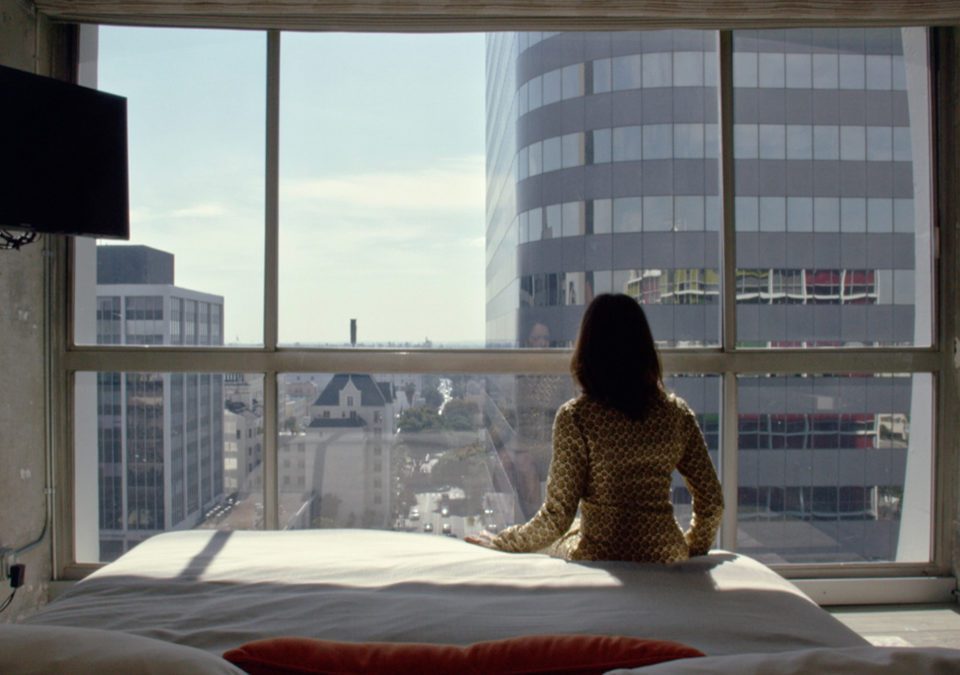 A grim face, tight-lipped and usually motionless, because this is the facemask of a puppet. The puppet presented by the architect, Amos, in Cécile B. Evans’ fictional TV series “Amos’ World” which has been running at Abteiberg Museum since Sunday, 26th May. However the architect hasn’t merely designed a residential complex, he’s created a living environment, a reality which he wants to impose on the residents. And so the reality experienced by a visitor to the museum is also defined by external factors. For in order to be able to see the first episode of the series he too must start off by climbing into a concrete-like architectural construct and seek out a space from where he can observe the episode as though he were watching it through a window. And he must observe in isolation – at least if he also wants to hear the soundtrack because there’s only one set of Edaphones in each of these rooms. 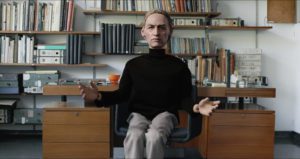 The observer then finds out not only that the place where he happens to be sitting seems to have emanated from the film, but also that the architect’s plan of creating a perfectly fused individual and social residential concept is not a success. One encounters sad, lonely-looking people. And they begin to destroy the architect’s plan once they understand the extent to which their actions are influenced by the actual rooms and spaces within this architecture. At this moment an allegory of our existence within constructed realities becomes apparent, as the inhabitants’ emotions unleash a rebellion against all the technological, ideological and physical structures that were intended to control them and us. In order to find out how they do this, and the format in which episodes two and three can be viewed, you yourself have to come to the Abteiberg Museum. This will also enable you to experience for yourself the many levels and the realities within the film. Evans doesn’t just mix puppetry with performances by real actors, animations also form part of the work. And the boundaries of realities seem to become blurred, so although their voices can be heard the actors are like puppets because they don’t move their mouths in order to speak. However, this too is just one facet of the multiplicity of layers that can be uncovered within the series.

The London-based Belgian-American artist, Cécile B. Evans, presents an installation consisting of three films which use a variety of media in various settings to blur the boundaries between reality and simulation.  In the museum’s rooms materials from the film set that have been turned into sculptures are displayed. The multi-disciplinary project is a co-production that is jointly staged by Abteiberg Museum, the Museum Moderner Kunst Stiftung Ludwig (mumok) in Vienna, the Tramway in Glasgow, the Galerie Emanuel Layr in Rome/Vienna, and FRAC Lorraine in Metz – with the support of Art Night, London, the Museo Madre in Naples, the Renaissance Society in Chicago, Glasgow International, Villa Merkel in Esslingen, and Chateau Shatto in Los Angeles. Abteiberg Museum is showing all three episodes, as well as stage sets and materials from the film production which Cécile B. Evans presents as sculptures. 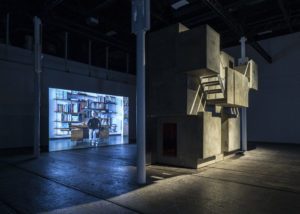 The Amos’ World project concludes in the autumn/fall of 2019 with the publication of a documentary about it. Beforehand a series of films and discussions will take place during the exhibition at Abteiberg Museum which will outline the interrelationships within the content of her work. The media to be used at the events, and the subjects to be covered and the dates, will be announced in the coming weeks. Abteiberg Museum has been able to participate in this project created by Cécile B. Evans due to generous sponsorship provided by Kunststiftung NRW (North Rhine-Westphalia Art Foundation) and the Hans Fries-Stiftung (Hans Fries Foundation).

Cécile B. Evans’ “Amos’ World” exhibition runs until the 15th of September at Abteiberg Museum.