The Pulverturm or magazine is also called the Dicker Turm (‘Fat Tower’) by locals, and it’s a striking remnant of the late mediaeval town fortifications. Like most mediaeval and Renaissance town fortifications the town wall had a ditch in front of it as an additional safeguard to prevent people from approaching. This section of the town fortifications consisted of an imposing round tower (with a straight wall facing the town) which had an external diameter of about 12.5 metres. The thickness of the walls (3.25 metres) and the smoke vents above its embrasures identify the tower as an early 16th century structure. Today the ‘Dicker Turm’ and the ‘Kleiner Turm’ (Small Tower) are still connected by the town wall. The tower is made from bricks that were fired in pits, and it’s been preserved up to a height of 7 metres. Up until the middle of the 20th century the Dicker Turm had a platform on top of it. The tower was rebuilt in 1974. This involved it being modified with a brick facing to form a round tower, and it was also given a conical roof covered with slates.

The historic structure which was once part of the mediaeval town fortifications now houses the district rifle clubs’ archive. Once a year the district rifle clubs’ association holds a ‘tower open day’ where people can see the archivists at work in the listed building. As well as historic flags and uniforms there are also books containing the associations’ minutes and other literary works in the Dicker Turm. The silver Byzantine chains and chains of office are only brought out of the vault for the marksmen’s festival. 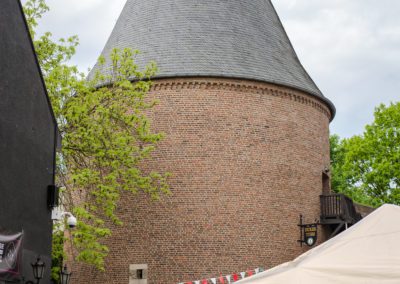